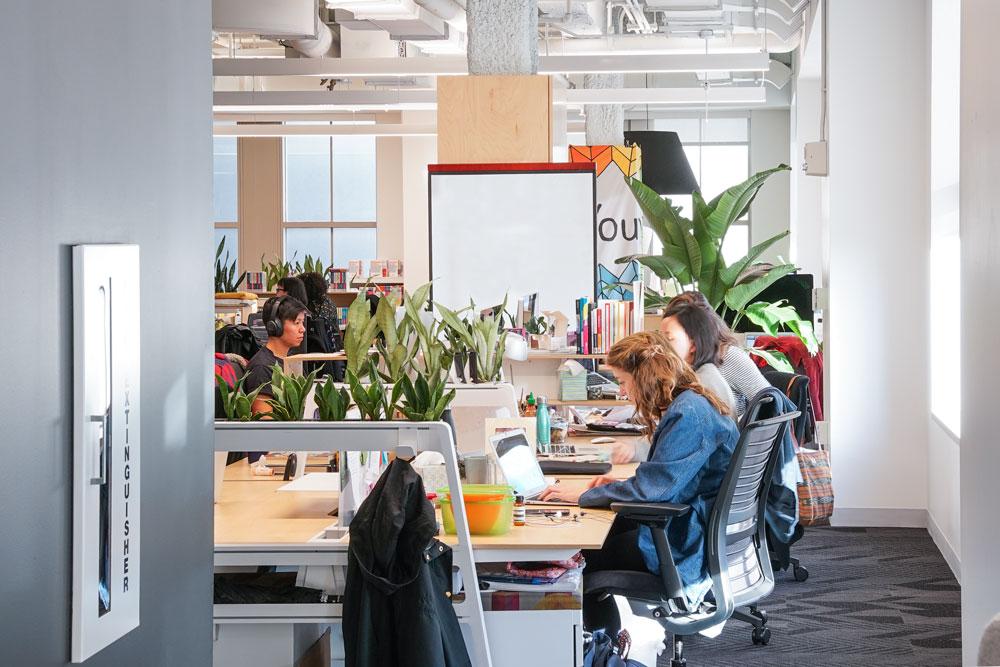 As long-time fans of TED Talks, Greenery NYC was thrilled to receive a commission to install a wide array of plants within their new TriBeCa headquarters. Working closely with the facilitates and design team, we created several areas of dense foliage that have a huge impact on the office decor and well-being.

Many desks were outfitted with individual built in planters which we filled with a variety of low maintenance Sanseveria, but the focus of the project was on areas of gathering, including the entrances to the office, cafeteria areas, and meeting rooms. Our goal was to create a low-maintenance, maximum impact installation that featured many different colors and textures of plants.

One of the primary areas of meeting and gathering at TED is their cafeteria space. They often hold meetings and workshops in that space as well, so it was important that we not take up floor space. We installed a line of cascading plants to help separate the kitchenette from the cafe, and over time these vines will grow to create a lunch visual curtain between the two spaces.

There are several small meeting areas within the office placed back to back, and we were challenged to create a visual barrier between them. As in many New York City offices, the TED space has an open floor plan. To help divide space and create more private meeting and working areas, we installed our Self Watering Green Dividers. These units are custom made by Greenery NYC and come fully irrigated with the goal of reducing maintenance time and operational costs.

We matched the wood tones and white finishes of the office to create individualized meeting areas with colorful and lush backdrops. These vertical growing systems have a huge visual impact with a minimal footprint.

TELL US ABOUT YOUR PROJECT